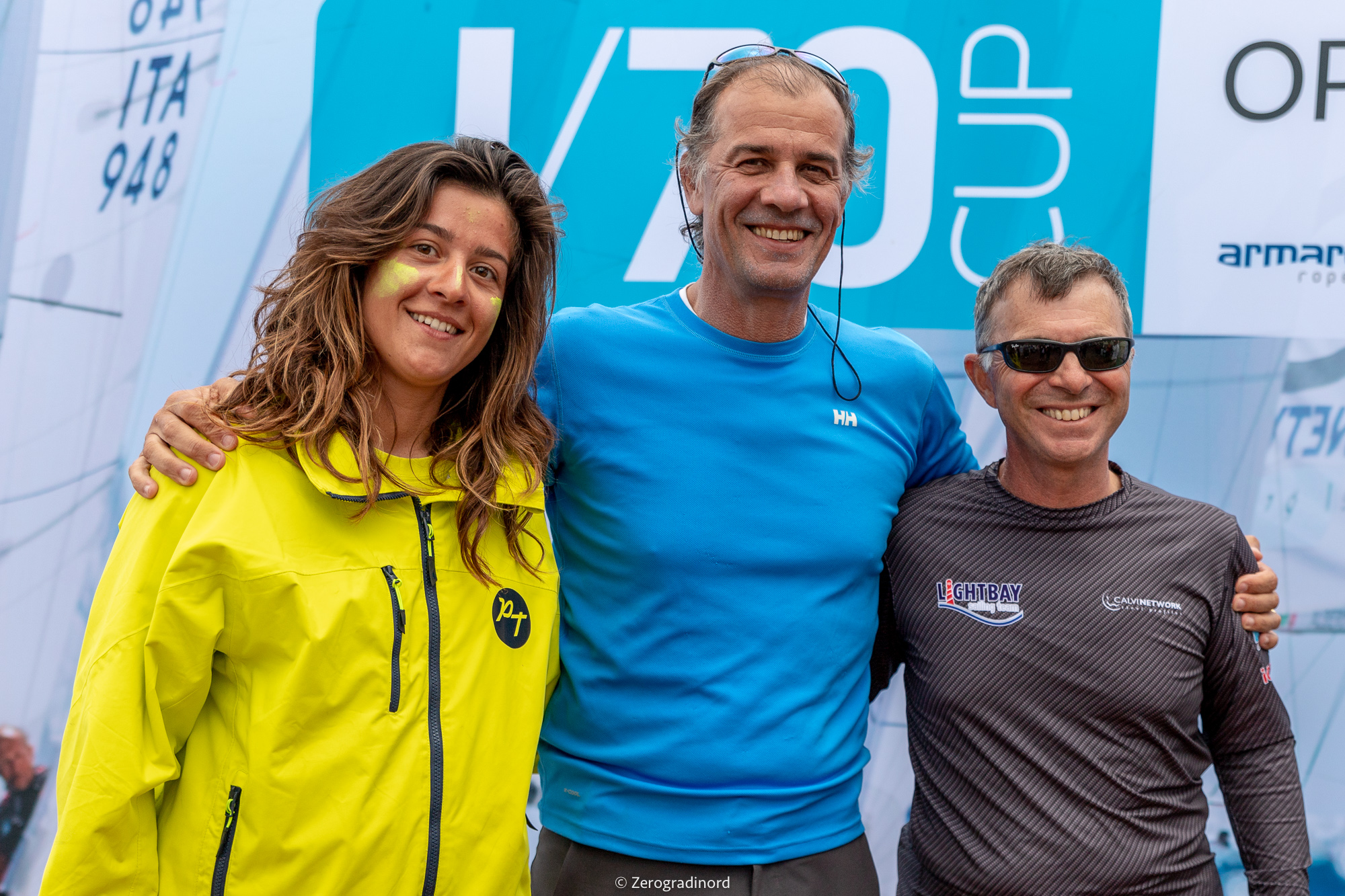 Porto Ercole, Tuscany, May 13 2018 – A battle for the podium until the last jibe characterized the epilogue of the J/70 Cup in Porto Ercole, second act of the Open Italian J/70 Circuit. The event consisted on a three-days of racing, where eight regattas – the maximum allowed by the NOR – have been completed in wonderful sunny conditions and with moderate breeze up to 18 knots.

Arriving at the last regatta of the series with a gap of only 6 points, Enfant Terrible (24-12 today’s partials), Calvi Network (9-8) and Petite Terrible (5-15) were the protagonists of a race with the potential to drastically change team placements on the final podium.

The first boat to cross the finish line was Calvi Network in 8th position, four boats ahead of Enfant Terrible, but the gap was not enough to gain the lead of the ranking, thus ensuring access to the highest step of the podium to the crew driven by the Ancona-based owner Alberto Rossi.

The podium of the second event of the J/70 Cup circuit saw then Enfant Terrible awarded with the gold medal, Calvi Network in second position and Petite Terrible, winner of Saturday’s Garmin Cup, on the third step.

In the Corinthian division, reserved for non-professionals, the success went to Uji Uji (8-3) of Alessio Marinelli, who managed to overtake La Femme Terrible (39-22) of Paolo Tomsic, leader of its division in the first two days of racing that eventually closed the event in third place. Second place for Noberasco DAS (10-14) of Alessandro Zampori who maintains the placement gained at the end of the races of Saturday.

In the last day of racing, the races were won ArtTube of the Russian entry Lera Kovalenko (1-19) and Mission Possible (UFD-1) of the German Markus Wieser, both at the first success in the series of Porto Ercole.

Maurizio Belloni, Vice-President of CNV Argentario, at the end of the event commented: “We are honored that J/70 Italian Class has chosen Porto Ercole as the location of its regatta and we are even more satisfied with the weather conditions and the work of the Race Committee which has very well led the fleet in a complete series of eight races which allowed the teams to better express their competitive abilities, giving us beautiful sporting images. We hope to welcome the class again next year”.

Leaving Porto Ercole, part of the fleet will head to Spain, where from June 12 to 16 many crews will take part in the J/70 European Championship. Among these, Claudia Rossi on board Petite Terrible will be there to defend the title earned in the last two years, but there will be also Enfant Terrible, Enjoy 1.0, Jeniale Eurosystem and a large representation of the Corinthian fleet: Jo, Noberasco Das, Why Not, La Femme Terrible, Irruenza…

The next appointment of J/70 Italian Class is set for July 11th in Malcesine, when the first Open Italian Championship will begin with two days of measurement operations.

This website uses cookies to improve your experience while you navigate through the website. Out of these, the cookies that are categorized as necessary are stored on your browser as they are essential for the working of basic functionalities of the website. We also use third-party cookies that help us analyze and understand how you use this website. These cookies will be stored in your browser only with your consent. You also have the option to opt-out of these cookies. But opting out of some of these cookies may affect your browsing experience.
Necessary Sempre abilitato

Any cookies that may not be particularly necessary for the website to function and is used specifically to collect user personal data via analytics, ads, other embedded contents are termed as non-necessary cookies. It is mandatory to procure user consent prior to running these cookies on your website.