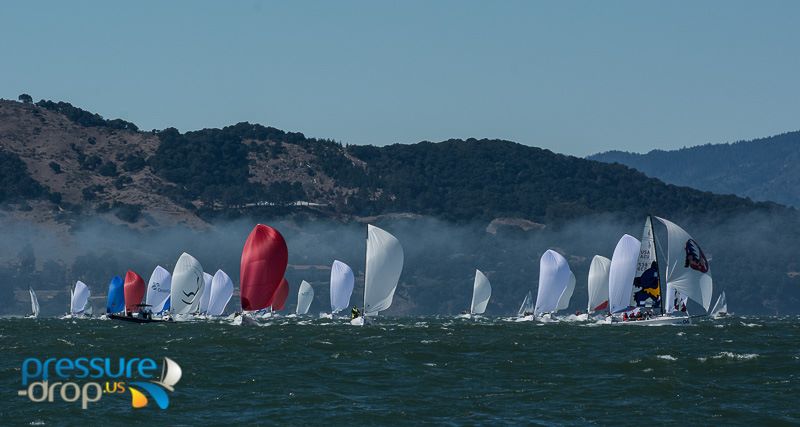 Opening day at the Alcatel J/70 World Championship hosted by St. Francis Yacht Club granted the 68 teams two races. Blowing W/NW 20 knots with gust up to 25  gave the J/70 fleet lots to work with. The morning started with a one-hour shoreside postponement to allow the sea breeze to fill in on the Berkeley Circle racecourse and there were two general recalls before the Race Committee added the motivation of a black flag: Cross the line early and disqualification is mandatory.The bulk of the fleet concentrated on the right side of the line, a move that suited skipper Chris Kostanecki and his crew aboard Jennifer (USA 370) just fine, as Kostanecki split with the herd and aimed left, finding clear lanes. As boats to the right-hand side of the course battled for scraps, Jennifer enjoyed a fast ride to the windward mark, which they rounded first, creating a commanding lead that they carried across the finish.“We nailed the start,” said Kostanecki, three minutes after crossing the line in this talent-rife class, which includes both former J/70 World Champions Tim Healy (2014) and Julian Fernandez Neckelmann (2015), as well as former America’s Cup winners and Olympic champions. “The weather end of the line was favored, and we went left. It was our game plan and we [stuck with] it.”Unfortunately for Jennifer, the Race Committee deemed that Kostanecki and 15 other skippers were on course side before the start, resulting in 16 disqualifications. After the Race Committee sorted out black-flag rulings, Jud Smith’s Africa (USA 179) took first place, followed by Joel Ronning’s Catapult (USA 187) and Julian Fernandez Neckelmann’s Flojito y Cooperando (MEX 384). The Race Committee—lead by Principal Race Officer Mark Foster—quickly began race two’s countdown, with the less-menacing U flag usurping race one’s black-flag guillotine. Jennifer’s start was clearly noticed by her competitors, and the left side of the line became expensive real estate as the clock wound down. A signal sounded, sails sheeted on hard, and 68 polished teams began battling 1.8 nautical miles of uphill sailing.While Cayard wisely predicted that a new world champion wouldn’t be minted in the first race, this didn’t stop Calvi Network (ITA 456) from dropping the hammer on race two. Come the final downhill run, Calvi Network’s distinctive logoed spinnaker was easy to spot, thanks to the generous lead that she enjoyed over Claudia Rossi’s Petite Terrible (ITA 853) and Kostanecki’s Jennifer. “We started on the right side of the course, and we controlled the right side,” said Cayard, minutes after exchanging a round of celebratory high-fives with his skipper and crew. “We kept the boat upright on the run, and we had some great steering.” While a bullet was fresh in mind, Cayard—a consummate professional—downplayed their result, given that the team scored 23rd in race one, putting them in 7th place overall. “It’s a long series,” said Cayard, his mind clearly focusing on the next four days.After two races, Smith’s Africa is in 1st place with six points, followed by Ronning’s Catapult (who also carries six points) and Neckelmann’s Flojito y Cooperando, who finished their day with 15 points. This sets the stage for a massive battle between these three teams as their tacticians—Victor Diaz, John Kostecki and Bill Hardesty, respectively—seek the podium’s top step.
To follow the Alcatel J/70 World Championship 2016, title sponsor Alcatel has been supplying smartphones to each boat that will be used as onboard trackers to report real-time positions, facilitating a state-of-the-art virtual spectator experience for those ashore. Join live races on www.tractrac.com.