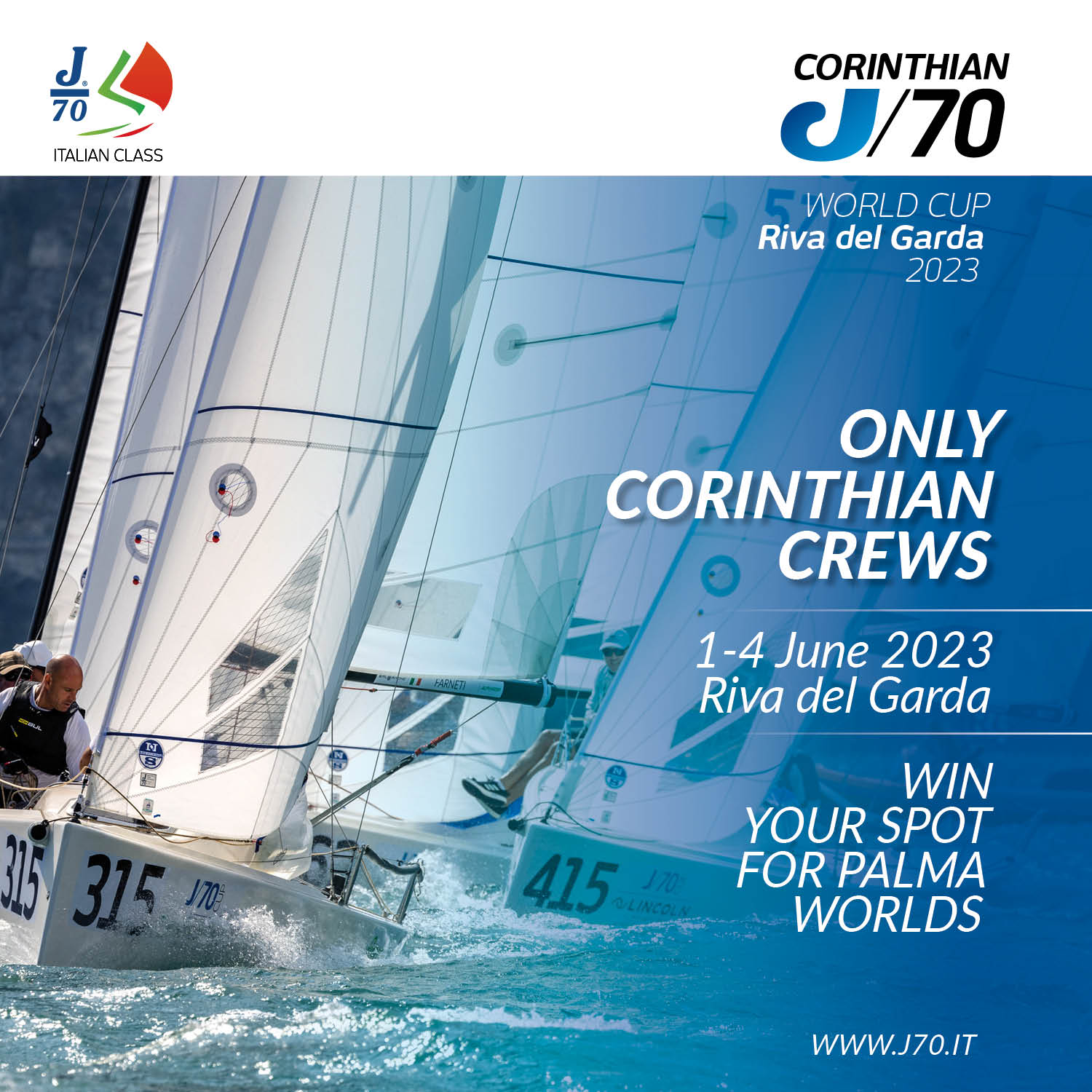 Riva del Garda, September 16th 2022 – J/70 Italian Class and Fraglia Vela Riva have been chosen by the International J/70 Class as organizers of the J/70 Corinthian World Cup’s first edition. Scheduled between June 1st and 4th 2023, the event will be reserved for all Corinthian crews and will award the top teams with some spot for the highly anticipated J/70 World Championship scheduled in Palma de Mallorca in 2024.

A choice that renews the international appreciation for the commitment of J/70 Italian Class to spread the “voice” of the J/70 world: actually, since 2014, the year of its establishment, it has been recognized as one of the most active and popular. A fact represented by the important numbers recorded at each event of the J/70 Cup and by the assignment of main international events such as the 2017 J/70 World Championship in Porto Cervo, in which over 170 crews took part, and the 2014 (Riva del Garda) and 2018 (Malcesine) J/70 European Championships. An event, the Europeans, that the J/70 Italian Class will also organize in 2024 edition jointly with the Yacht Club Punta Ala, already involved in the organization of some circuit’s leg.

For the J/70 Corinthian World Cup, the class led by Federico Siragna will reactivate a collaboration of excellence: to host the event will be the Fraglia Vela Riva, already home to the aforementioned European Championship and of an event of the 2015 circuit, as well as, during the past July, of the final stage of the J/70 Cup 2022. Appointment which, by virtue of the almost eighty subscribers, registered a wide success in terms of registrations: numbers that are expected to be exceeded on the starting line of the upcoming J/70 Corinthian World Cup.

“Being listed as organizers of this first event is the best possible recognition for what our association has done. I am sure that the relevance of the event, the fact that it is reserved only for non-professional teams and having chosen Riva del Garda and Fraglia Vela Riva as the venue will be the ingredients of a successful championship. Since this is an event reserved only for Corinthian teams and overlapping the already planned J/70 Cup’s stage of Riva del Garda, the J/70 Corinthian World Cup will not be valid for the purposes of the 2023 season. The circuit, of which we are defining some locations, will be therefore articulated on four events, as happened in 2022, and will end with the Italian Championship, scheduled between 29 September and 1 October: we have anticipated it by just one week to avoid any overlap with the iconic Barcolana” explained Federico Siragna, president of the J/70 Italian Class.

“The J/70 Corinthian World Cup was born from the will of the International Class to increase opportunities for non-professional sailors and for the first edition we have chosen one of the most beautiful locations in the world” commented the president of the International J/70 Class, Scott Weakley.

“The collaboration between Fraglia Vela Riva and J/70 Italian Class has always led to the organization of competitive and extremely participated regattas, which have brought in Riva del Garda internationally renowned sailors, Olympic medalists and a large number of sailing enthusiasts. We are therefore impatient to work together again, with the intention of delivering an unrepeatable event to the participants: this year, also thanks to the excellent weather conditions, we succeeded and I am sure it will be the same next June” commented Andrea Camin, president of Fraglia Vela Riva, the only Italian club to be awarded with the President Development Award, a recognition assigned by the World Sailing’s president to the most active and effective reality in the promotion of sailing.