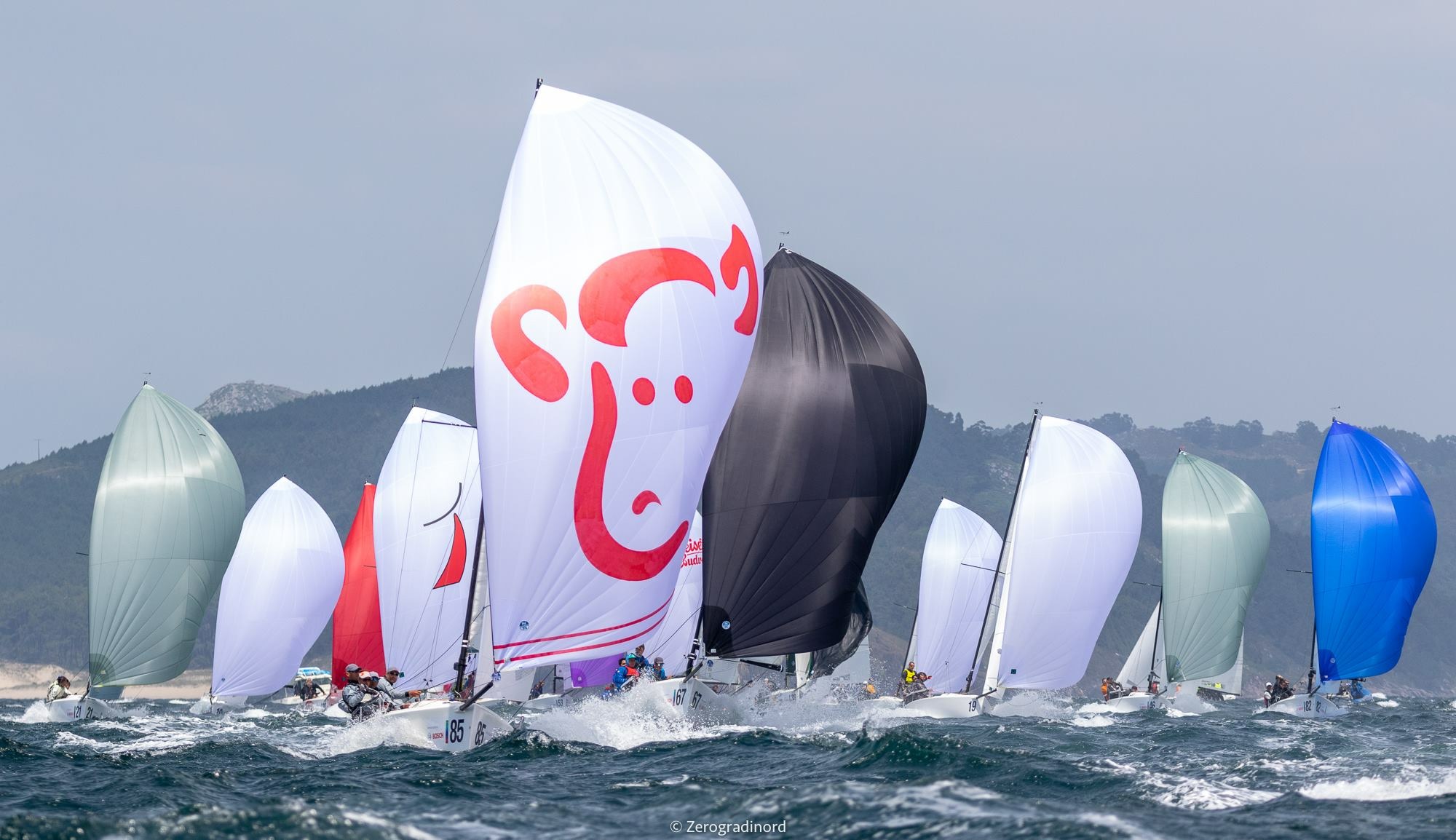 Vigo – 69 teams from 17 different countries enjoyed yet another spectacular day of racing in the Ria de Vigo for the 2018 J/70 European Championships. A thick sea fog cleared by late morning, switching on the sea breeze to provide two races with surfing conditions in stunning surroundings. The day belonged to Gustavo Doreste’s Fermax (ESP), scoring two bullets to jump up the leaderboard to fourth, and in with a chance of making the final podium tomorrow.

“We have had two really clear starts today and chose the favoured side in both races, when you get clear of this fleet you have more time to get the rest right. We don’t have an objective in place, we are just trying to get better day by day. If we keep on working as we did today with the manoeuvres, it will raise our confidence, and we will sail fast…… let´s see how it goes tomorrow.” Gustavo Doreste

Renato Cunha Faria’s “To Nessa” (BRA) has travelled from Rio de Janeiro to compete in Vigo. Renato’s team are hoping to qualify for the 2018 J/70 World Championships in Marblehead, USA. To Nessa scored their third podium result today, coming a very close second behind Fermax in the last race of the day.

“We got a good start and we have been very happy with our upwind speed, so we made the top mark in good shape, and an early gybe got us into clear air and good pressure. The second upwind leg went well. On the downwind to finish, Fermax was ahead of us, and we decided to settle for second and gybe to cover the fleet. The level of competition in Europe is very high, so we are delighted to have done well in a few races. This class is a lot of fun and very competitive, it is so nice to be racing in a big fleet with so many world class sailors. ” Renato Cunha Faria

Clive Bush’s “Darcey” (GBR) scored their best result of the championship so far, a second place in Race 10. The championship has not been a good one for the British teams. Prolific 49er sailor John Pink, calling tactics on Darcey, shares a few ideas why.

“We have been trying a few different set ups to increase our pace and it all seemed to come together in that race. We got a nice little shift up the middle of the beat and rounded top five, and we had a decent bit of pace downwind as well. This fleet is really competitive with lots of good sailors from many countries. I think in general the British teams are lacking a bit of pace against these guys, but we are catching up, and the way to do that is by competing at more events and developing our sails a little bit better.” John Pink

Tomorrow is the final day of the 2018 J/70 European Championships. Up to two races can be held, sea breeze conditions are forecast for a fantastic finale.