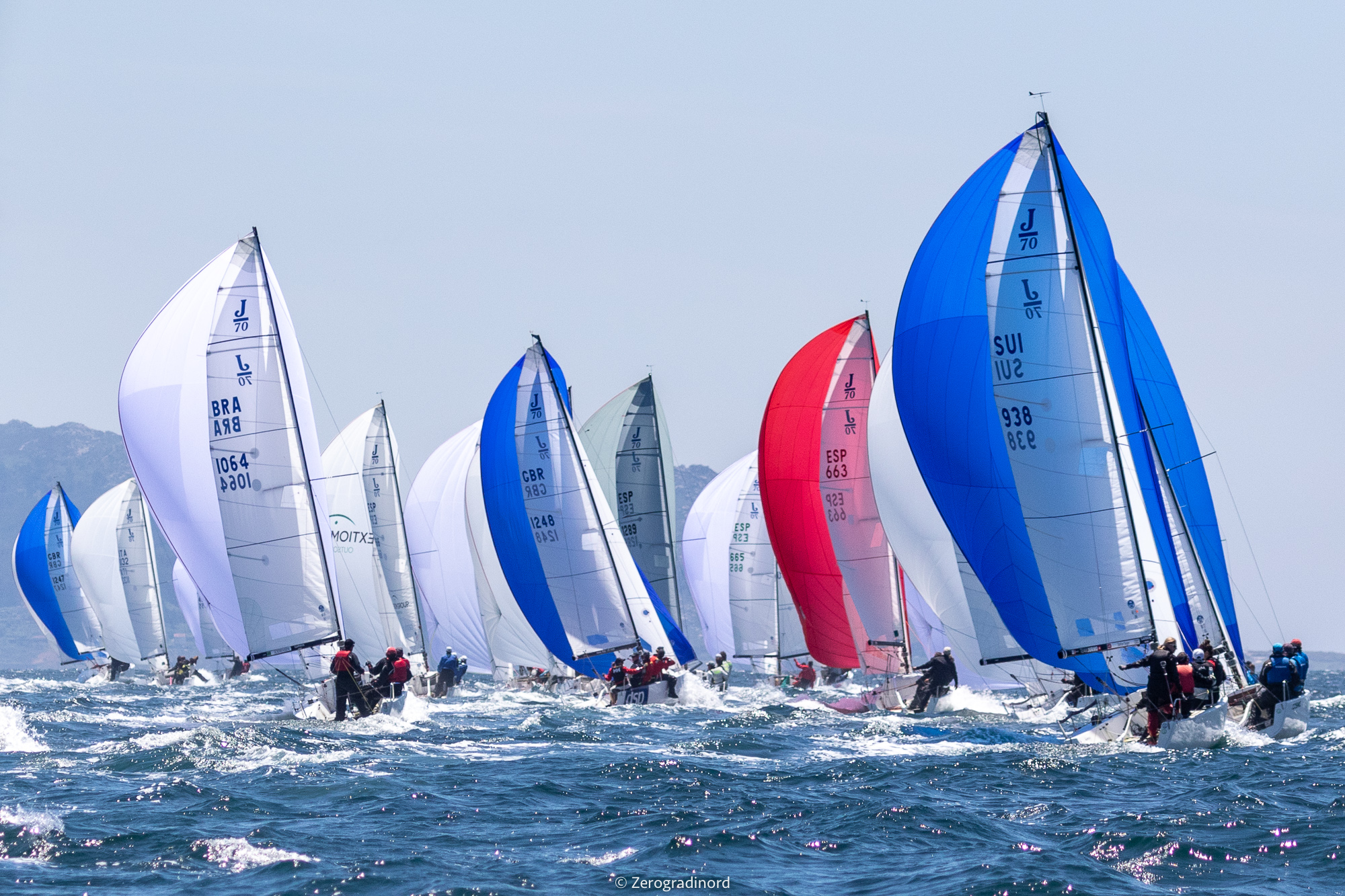 After two days of fast exhilarating sailing, the pace changed with lighter conditions in the Ria de Vigo, but the intensity of the brilliant sunshine and the competition was still red hot. After two General Recalls in Race 8, the Black Flag was hoisted and 13 teams were disqualified in the restart. Championship leader, Peter Duncan’s “Relative Obscurity” (USA) managed to stay out of trouble but only just. The J/70 World Champions scored a win in Race 8, but came 24th in Race 9, after getting caught in traffic upwind. Duncan’s team still has a firm grip on the top of the leaderboard, but with four more races scheduled, there is plenty more action to come.

Max Hutcheson is on the bow for Relative Obscurity. The 26 year-old is new to the team, and grew up through junior sailing in San Diego.

“I have known Willem (van Waay) for a long time but getting into to high level racing as part of this team has been a lot of fun. It’s super entertaining ashore and that holds true on the water. The programme is very well run but it is also very enjoyable, and I am ready to ride with this team as far as it goes.” Max Hutcheson.

26 year-old, Umberto Luca’s “Enjoy” (ITA) is going from strength to strength, after breaking into the top three yesterday, the team from Lake Garda scored a 10-2-12 today to move up to second place. Alberto Rossi’s “Enfant Terrible” (ITA) was black-flagged in Race 8, slipping to third overall just a point behind Enjoy.

Jose María Torcida’s “Noticia” (ESP) had their best day of the regatta scoring 4-9-2 taking the team into fourth place and the best team from the host nation. All-in-all it was a good day for Spanish teams, Gustavo Doreste’s “Fermax” (ESP) won the last race of the day to move into the top ten. In the Corinthian Division, Luis Bugallo’s “Marnatura” (ESP) scored a 5-7-14 to take the lead by four points from Paolo Tomsic’s “Società Nautica Grignano” (ITA).

“We still have four races to go, we are happy and we aspire to really do well in all of them. Duncan had a bad result already today so he knows he must be conservative. The spirit of our team is really high and this regatta is like a marathon: It is about not having a bad result and today we have sailed well.” Jose María Torcida

Some of the world’s most accomplished sailors are taking part in the J/70 European Championships. World Champions from every aspect of the sport, Olympic medallist, America’s Cup and Volvo Ocean Race sailors. However some are just at the beginning of the journey. Remi Piazza’s “Mistral” (MON) is the youngest team at the championships, the four sailors are just 15-18 years of age, and proudly representing the Yacht Club de Monaco. The club started a youth sailing programme in 1970, and today it has 350 members, from as young as six years-old. 18 year-old Alba Malivindi is driving Mistral. “This is our first international regatta as a team, and we have only been sailing together for less than a year. We are enjoying the event and it is a really good experience for us, because the level is really high.” Alba Malivindi