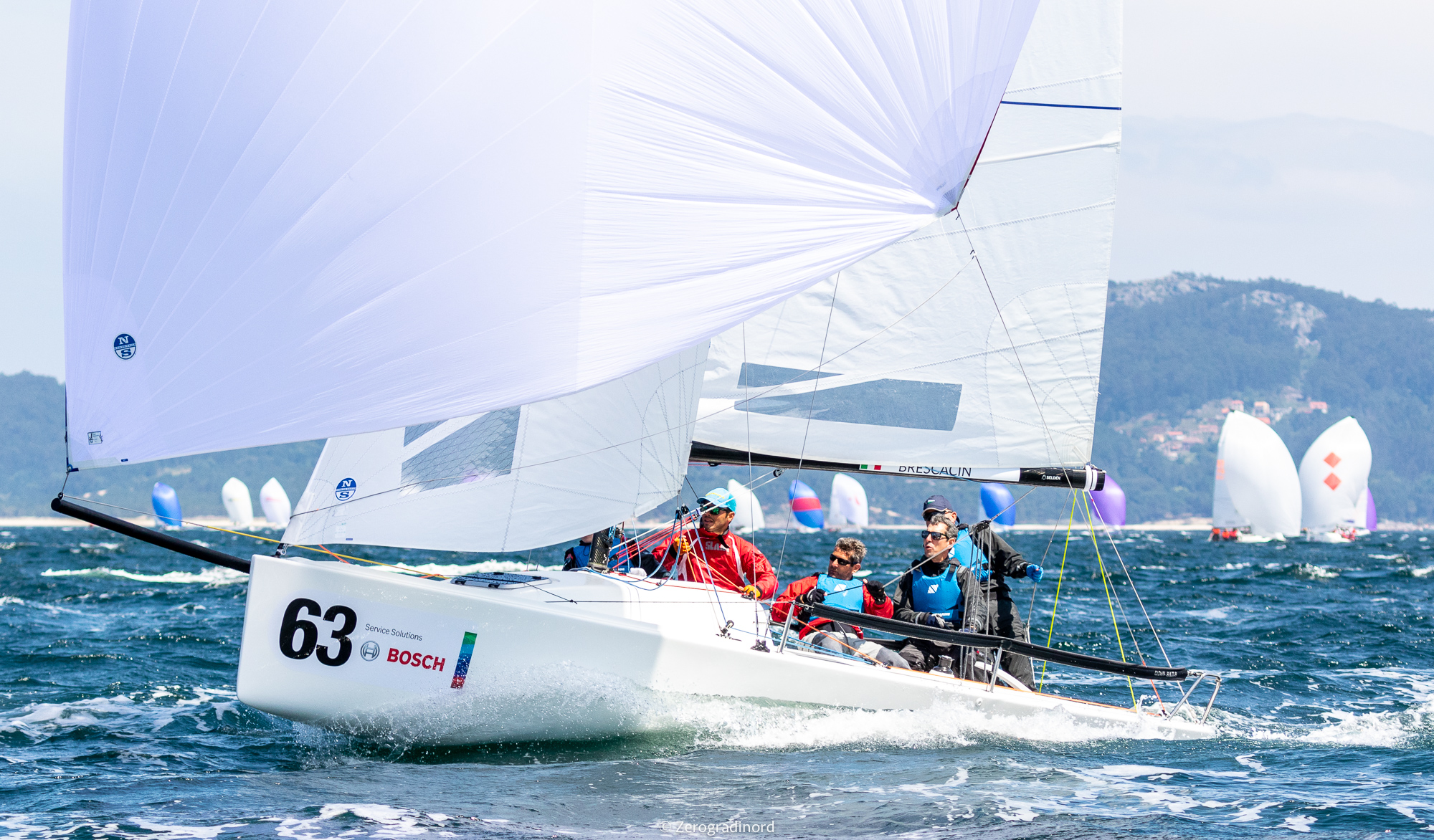 Vigo, June 13th 2018 – Day Two of the 2018 J/70 European Championships produced a second day of thrilling racing in the Ria de Vigo. The wind speed topped out at over 20 knots for much of the day, providing awesome downwind conditions for the 69 international teams competing for the J/70 Open and Corinthian European titles. Three races were held for the 69 boat fleet, with a discard kicking in on the last race of the day.

Peter Duncan’s “Relative Obscurity” (USA) scored two bullets to lead the fleet after six races. Relative Obscurity’s trimmer Willem van Waay commented: “Those are the days that keep you wanting to race these boats, it was gorgeous out there today.”

Alberto Rossi’s “Enfant Terrible” (ITA) put in another great performance winning Race 4 to keep the pressure on the leader, just two points behind. Paolo Tomsic’s Società Nautica Grignano (ITA), had another great day scoring a 5-10-2, putting the Corinthian team from Lake Garda into third place overall and top of the Corinthian Division.

Paolo Tomsic was quick to give praise to his team for their impressive performance.
“We are so very happy with this unexpected result, we are very honoured to be in Vigo, this is a beautiful location where we feel very comfortable. We hope our performance will be consistent in the next few days. We are used to big winds, being based on Lake Garda , but there you never find waves as big as this! Our team is Giuliano Chiandussi, Emanuele Noè; Francesca Pagan, and above all our owner, Mauro Brescacin.” Paolo Tomsic

Umberto de Luca’s “Enjoy” (ITA) is in fourth place after six races. The 26 year-old from Yachting Club Torri on Lake Garda, started sailing in the class last year after competing in the Laser and Finn Classes.
“There was strong wind today and very choppy seas with some good waves so it was a lot of fun, especially downwind. The results are coming because we are getting everything together but the most important thing is that we are very fast, especially upwind, which has got us out of some tricky situations, and the tactician is making some really good calls. It is an honour to sail against these big guys in the sailing world, and exciting for us to do so well.” Umberto de Luca.

J/70 “Calypso” (MLT) co-skippered by Johnathan Calascione & Seb Ripard, started the day well with a second place but lost a batten in the pre-start for Race 5 forcing the team to retire. Calypso was back out for Race 6, scoring a 10th place, keeping the Maltese team in the top five.

Luis Bugallo’s “Marnatura” (ESP) had a great day, fully pulling the trigger downwind, scoring three top-ten results to finish the day in sixth place overall, and second place in the Corinthian Class. “Yesterday we decided to be conservatives and not take too much risks. However, today we planned the opposite and it worked. We are happy with our day.” Luis Bugallo’s Marnatura from Real Club Náutico de Vigo is the top performing Spanish boat after six races.