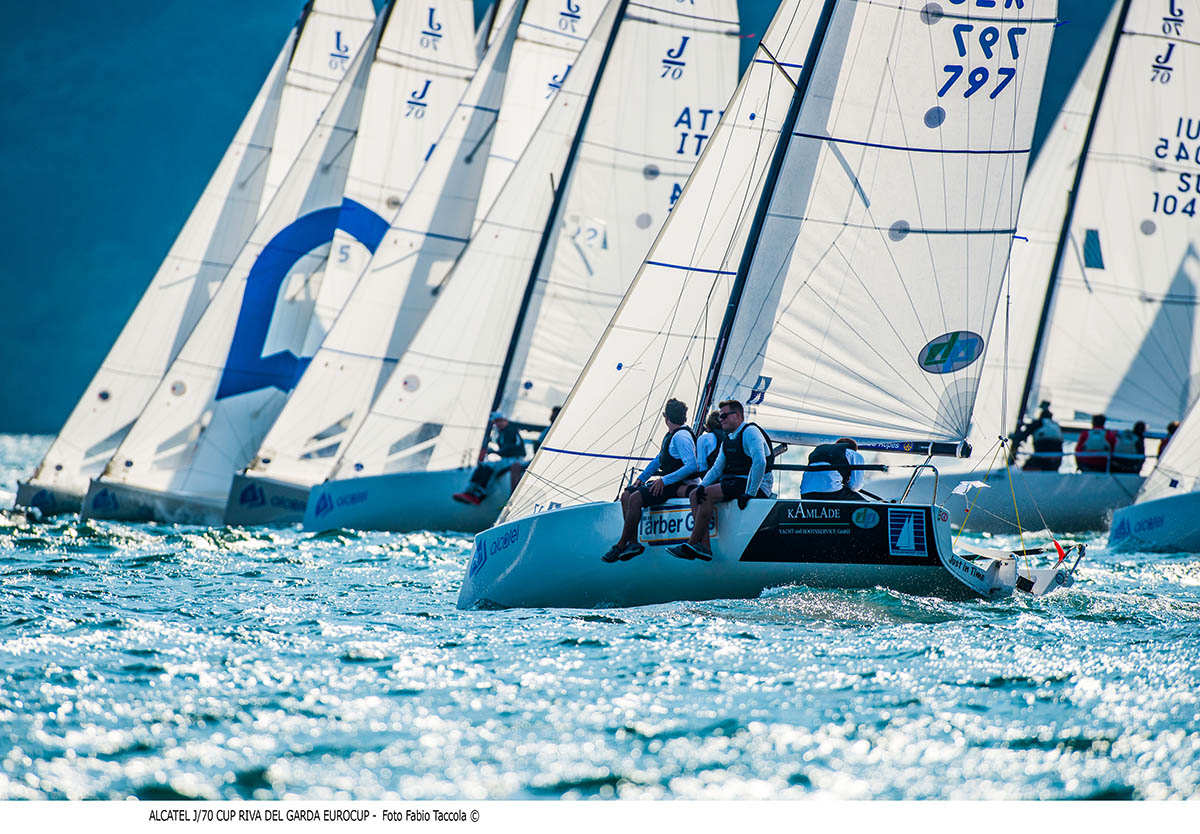 San Francisco, CA (September 27, 2016) – The 3rd edition of the J/70 World Championship gets underway today. Hosted by the St. Francis Yacht Club this is the second occasion the championship has been held in the United States as next year’s edition will be contested in Italy (Porto Cervo, Sardinia, September 12-16, 2017 ). Nearly 80 boats have entered with over 20 nations represented. Racing will be intense with a world class array of tacticians guiding their skilled owner/drivers through the five days racing scheduled. Starting and finishing guns will echo across the Berkley Circle racecourse, an area of San Francisco Bay to the northeast (and leeward) of Alcatraz Island which is located on shallow, tide-protected waters, out of the slippery influence of the swiftest-flowing current that rake the Bay’s deeper waters . The weather has an air of unpredictability providing so far ‘a little’ damp conditions.
A glance at the 2016 Alcatel J/70 Worlds entry list reveals  star-studded boats from 15 nations, including J/70 World Champions Tim Healy (Helly Hansen) and Julian Fernandez Neckelmann (Flojito Y Cooperando); J/70 North American Champions Jud Smith (Africa) and Joe Bardenheier (Muse); as well as the outgoing World runner up Carlo Alberini’ Calvi Network (two-time winner  at Key West Race Week) and the current continental  champions  Claudia Rossi on Petite Terrible. Additionally, this impressive list also includes world-class tacticians such as John Kostecki,  Olympic medal and the Volvo Ocean Race winner, as well as Bill Hardesty and Paul Cayard who is joining Alberini’s Italian team on Calvi Network-Econsulting.  An impressive company to keep for a class that just started sailing in 2012, and before San Francisco’s edition has only held two previous world championships, first in Newport, Rhode Island (2014) and then in La Rochelle, France (2015). And spotlights are already on the Italian event in Porto Cervo where model sailing conditions, world-class talent, top-level race management and unbelievable socials will all come together to result in a World Championship worthy of the fastest-growing fleet around.
‘We couldn’t be happier with how widespread J/70 sailing has become in just four years,” said meanwhile Jeff Johnstone, President of J/Boats. “Hull numbers 1103 through 1111 are the latest to be built and will be competing at the San Francisco Worlds right alongside hull #2’.
Along with a big spike in hull numbers comes a corollary spike in boatspeed from all corners of the planet. “The class’ level is going up very fast, with more talented sailors joining every year,” said 2015 J/70 World Champion and 2016 J/70 North American Champion, Julian Fernandez Neckelmann.
To follow the Alcatel J/70 World Championship, title sponsor Alcatel has been supplying smartphones to each boat that will be used as onboard trackers to report real-time positions, facilitating a state-of-the-art virtual spectator experience for those ashore.
Join live races on www.tractrac.com.