HomeNews THE BATTLE FOR THE WORLD TITLE IS STILL WIDE OPEN

THE BATTLE FOR THE WORLD TITLE IS STILL WIDE OPEN 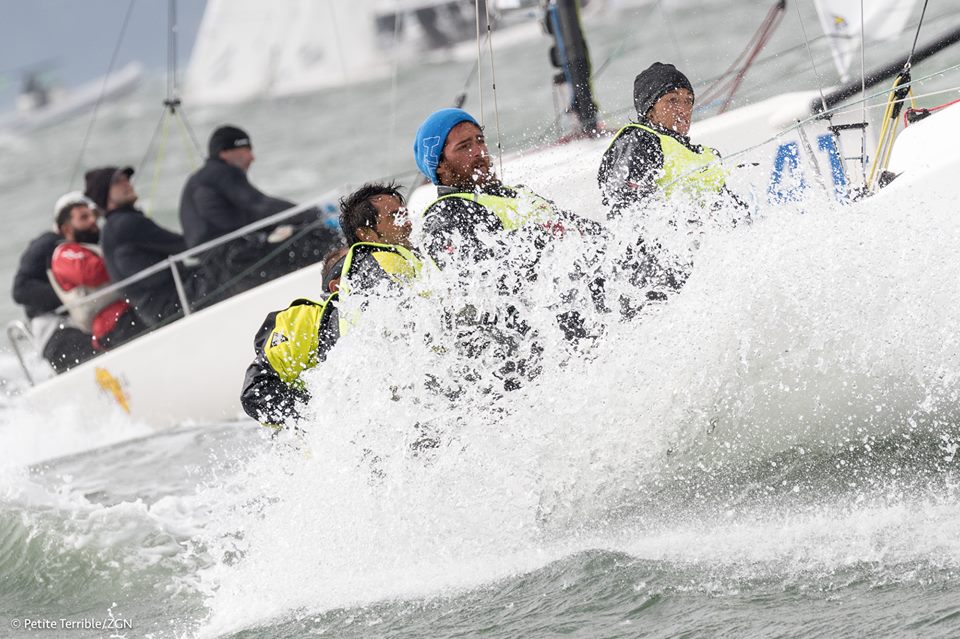 San Francisco, CA (September 29, 2016)  – With seven of the twelve races now completed the competition is really hotting up. Going into the penultimate day of racing Claudia Rossi’s Petite Terrible now has a slim two points lead over joint second placed Catapult  (Ronning-Kostecki) and three on Africa (Smith-Wright). Fourth placed Carlo Alberini with Paul Cayard calling tactics on Calvi Network  is also still in contention for the title just ten points behind the leader. Day three of competition at the Alcatel J/70  World Championship hosted by St. Francis Yacht Club saw two races take place in a shifty westerly breeze, which ranged as low as five knots and as high as 22 knots. First race got underway in a fairly light air with Catapult strutting to a clean win sailing wing-on-wing, followed by Hooligan’s Flat Stanley and Claudia Rossi’s always-fast Petite Terrible. On the second race, as the leading group was about to reach the leeward gate, the race Committee decided to abandon the race for  the course was no longer square to the wind. The next two starts ended up in general recalls as the outgoing tide flushed boats over the line with 40-some boats OCS in the second general-recall start. Therefore the following start was conducted under the dreaded U flag. The gun fired and the fleet pounded uphill in 18-22 knot airs and some of the afternoon ebb’s strongest waters. Africa took the bullet, followed by Sail Newport, Catapult and Petite Terrible. With two days to go battle now heats up – the reigning European Champion Claudia Rossi and last year’s world runner-up Carlo Alberini both aim to add the World’s title to their cabinet whilst Ronning and Smith are equally determined to prevent the trophy going back across the Pond on Saturday .Anything can still happen in Frisco. Spectators can follow the racing online on www.tractrac.com thanks to Alcatel-supplied smartphones, which the event is using as onboard trackers.